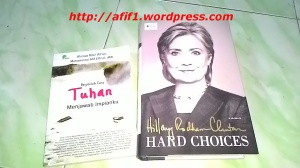 Hillary Clinton’s Hard Choices. Beside is my first book 🙂

Actually I made a mistake when I took Hillary’s face on a hardcover book entitled: Hard Choices, in a book bazar in Surabaya, Indonesia. I supposed to met another book of hers: Living History. But, it is okay for having the first one.

I heard about Hillary Clinton in my childhood years, when the Monica Lewinsky scandal blewed up by the media around the world, Indonesia’s media included. Even though at that time I did not understand what the scandal is about.

Years then I know that the scandal is more about a woman, a wife, who try to safe his husband (Bill Clinton). It was not an easy choice I thought. How could a wife, whom betrayed by his husband, by had a sexual affair with another woman, but the wife safe the man! Even several media said that Bill Clinton’s savety during those time was in Hillary’s hand, not in Congress or Senate’s hand. I believe that was a hard time for Hillary, a hard choice, as she said in the title of her book.

Another hard choices of her was to do service for her country, USA, as a Secretary of State during Barack Obama’s presidency. How come an ex-rival, become a solid partner then? How powerful this woman to do that. How she built that “rinocheroes’s skin” during her lifetime.