I even did not birth yet, when chaos happened in Jakarta during 1960’s. That was what we called the year of Impeachment of Sukarno, Indonesia’s first president. That background also brought to vast reader and viewer through novel and movie entitled the Year of Living Dangerously. 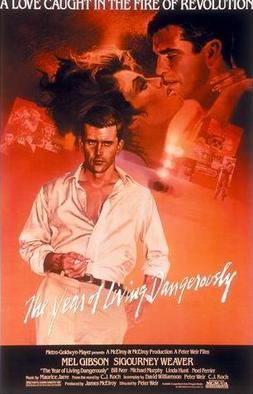 Those title claimed as a translation of Sukarno’s word “TAVIP: Tahun Vivo Pericoloso”. The word is a combination of Indonesian and Italian language.
Back to the movie, it was produced by Hollywood in 1982. Starred by Mel Gibson in his very young age. Played as a journalist in Indonesia during the chaos, that emerged from the 30 September movement. The history of the tragedy itself did not clear yet, until today. Still has lots of question till today.
Watching the movie, I realized that Indonesia was the background when I saw the middle part of the movie. Why I could recognized Indonesia as its background? Because the setting of the shooting was not taken in Jakarta! It was the Phillipine! Why?
Several comments in YouTube on the movie trailer said that, the producer did something wrong. Caused it must be took the picture in Jakarta. Since the story was about Jakarta during the riot of 1960’s.
Of course the producer was not wrong. They did not got the permit from Government of Indonesia to took the picture in Jakarta. If we saw the era of the movie, it was New Order of Suharto era. The other dictator, several block of people said like that.
Even though the movie did not taken in Jakarta, the director still tried to depicted several icons of Jakarta, such as Tugu Selamat Datang, etc.
As an Indonesian, I really proud that Indonesia taken as a background of Hollywood movie. I only mean to talk about the background. Same hits also happened during Julia Roberts’ movie, Eat Pray Love, took pictures in Bali island of Indonesia.
Whether Hollywood wants to reproduce the movie into the newer version, it must be have a great enthusiasm from Indonesian and the Government. Especially from Indonesian Actors and Actresses. It must be wonderful. The year of Living Dangerously: Jakarta During 1960’s riots. [Afif E.]